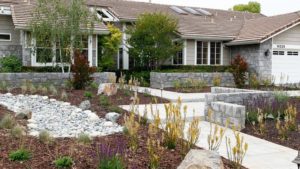 (photo credit: Eduardo Contreras - U/T) Bob and Andrea Raibert experienced a shock when they moved from a smaller property to their new home in Poway and then got the water bill for last July and August. The existing landscape was mainly Bermuda grass that required a lot of irrigation to keep it green. There were a few bushes planted along the street, and two diseased birch trees needed to be replaced.

“With this and the ongoing drought and mandates to cut water use, we wanted to do our part,” Bob said.

The Raiberts also wanted more color in the landscape, and plants that would attract hummingbirds and butterflies.

Making a plan: Bob Raibert attended the WaterSmart Landscape Makeover Series, a four-class program offered by the San Diego County Water Authority (SDCWA). Then the couple hired Sills Landscape Design to create a new design for the large front yard with moderate- to low-water-use plants that are drought tolerant.

The details: The total area landscaped was about 4,000 square feet. Most of the work was contracted out, but Bob removed trees and bushes himself, picked out plants at Evergreen Nursery and Village Nurseries and marked their new locations in the yard. He also installed the landscape lighting. “This was a great way to meet the neighbors (who were) out for walks,” Bob said.

About 15 percent of the front yard is now covered by dry creek beds, with rocks from KRC Rock in Poway; this helps to retain water when it rains. The rest of the area is covered with soil-enriching compost and mulch, both from San Diego Mulch in Lakeside.

Costs: Bob Raibert said the entire cost for the project was about $16,000, a third of the cost going for labor and the rest for materials.

However, since the Raiberts participated in the SDCWA Sustainable Landscapes Program, rebates from that program will cover about a third of the cost, reducing the Raiberts’ expenses to about $11,000.

Water saved: The landscaping is still new, so it’s too early to know exact water savings. But Bob Raibert said his hope is that water consumption from May through October this year will be down by 40 percent over the previous year. This would save about $100 a month on their water bill.

Lessons learned: Bob Raibert urges other homeowners considering a yard makeover to educate themselves about sustainable landscaping, and to carefully follow the steps required in any rebate programs.

He said it’s important to use good quality materials and plants, to achieve “a well-finished landscape.”

Another plus: In his WaterSmart classes, Bob learned that a benefit of water-wise landscaping is reduced maintenance.

“Previously it took almost two hours to mow, trim and blow the grass about every 10 days,” he said. “Now, this work is eliminated.”

View all posts by: Dicksey Williams

Send this to a friend